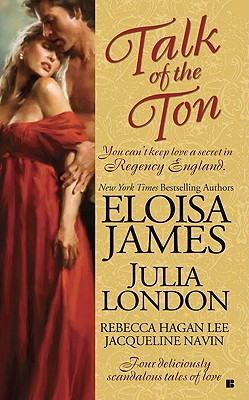 In the salons of the ton, no tidbit is more delicious than a rumor of amour—the more outrageous the better. Rakes and rogues, ladies of high station and low morals are choice fodder for the gossips of society. Now, four of today's most popular Regency authors titillate the ton with tales of how untoward talk can fan the flames of passion.

"The Vicar's Widow" is a novella set in Regency England.  In 1816 Darien wildly kisses Kate, the Vicar's wife at a holiday party.   Three years later, he is the toast of the Ton and she is a widow that he still desires. However, Emily wants Darien to offer for her, so she spreads rumors to eliminate her rival by turning the Vicar's Widow into the TALK OF THE TON.