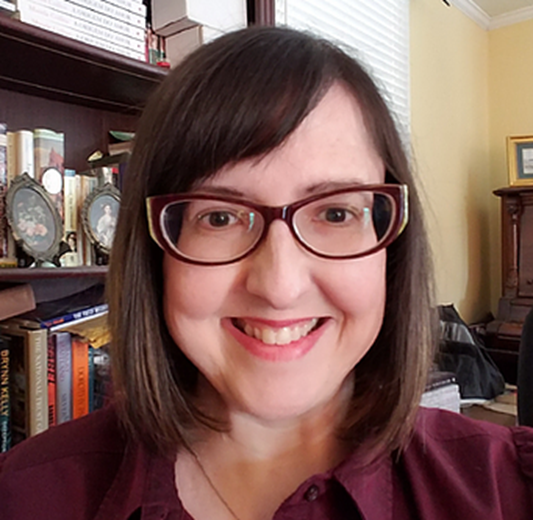 Manda Collins grew up on a combination of Nancy Drew books and Jane Austen novels, and her own brand of Regency romantic suspense is the result. A former academic librarian, she holds advanced degrees in English Lit and Librarianship. Her books have been favorably reviewed in Entertainment Weekly, Library Journal, Booklist, Publisher’s Weekly, Bookpage, and USA Today.  Her novel Duke with Benefits, was named one of Kirkus Books Best Romance Novels of 2017. When she’s not writing she can be found advocating for disability rights on Twitter, watching true crime documentaries, and knitting very inexpertly. A native of Alabama, she lives on the Gulf Coast with a very stubborn cat and more books than are strictly necessary.

You are so right about it being an excuse for procrastination! And as writers I think we’re really good at fooling ourselves into thinking we just can’t even try to get words down today for whatever made up reason. What I’ve found though is that if I at least make myself open my manuscript and look at the previous days words it almost always makes me want to add to them. I don’t always end up hitting my planned word count but at least I have more than when the day started.

Thank you so much! I do try to find the humor in things. Always have. I think what I’d like more Americans to understand about disability rights is that they’re beneficial to everyone. Part of the human condition (unless you have infinite wealth and the ability to transplant your brain into a newer, healthier body) is that sooner or later every last one of us will have a disability of some sort. It’s just that some of us have to deal with them at a younger age than others. (So, the able-bodied jerk who is today parked illegally in the handicapped spot will one day need that spot. And if karma works, they’ll have to face-off with their younger jerkier self.)

By far, the most difficult part of writing a blended genre is struggling to make sure I don’t give short shrift to either. Most of the time I think I do a pretty good job, but because ultimately I’m writing in the romance genre overall if anything gets sacrificed it’s usually some over the top mystery element. Which is probably for the best! And though I’ve always had humor in my books with my latest series I’ve felt more freedom to let my comedy flag fly. So, I think a logical place to start would be A LADY’S GUIDE TO MISCHIEF AND MAYHEM. (JFL sidenote: love this book! You will too.)

If you could hear all the lectures I’ve given Toast about her treat habit! It’s like she thinks I’m made of cat food money! Despite the fact that I’ve always been an animal lover I haven’t written a lot of pets into my books. But in this latest series one of the heroines has a very temperamental Siamese cat who shares some qualities with my temperamental Tabby. Like Ludwig, the fictional cat, Toast is very talkative and does not mind telling me when she disagrees with my decisions about…well anything and everything! We do binge a lot of TV together though I pay a little more attention than she does. Lately we finally joined the bandwagon and watched Ted Lasso. It’s just as happy-making as advertised. (JFL sidenote: Tried to explain this show to my sister and failed. Just watch it. You won’t be sorry)

I’ve really been enjoying Martha Water’s trilogy of Regency RomCom’s, the third of which, TO MARRY AND TO MEDDLE, I was just lucky enough to read an early copy of. The writing style is effervescent and the books are genuinely funny. They remind me of the funny Regency trads I loved back in the day, but sexier